For a while, I didn’t think that I would ever get to say this. The dodger is done! And it does look good – from 10 feet or so. Murray and I see all of the flaws but most everyone that looks at it seem quite impressed. I have sent photos to Jeremy to be posted on the website, just in case you want to check it out. But, we have been at the marina just short of one month. In that time, we waxed, bottom painted, launched, provisioned, built a dodger from scratch and finished installing windows in bimini. 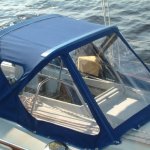 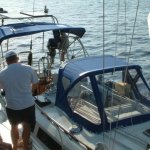 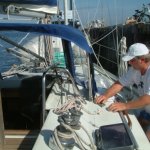 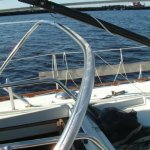 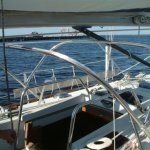 But now, we are ready to head out. Except for the outboard motor. Last thing to try and it won’t run. So far. Murray is taking it apart right now and cleaning crud out of the carburetor. If we get away today, we will head as far down the St John River as we can. Then, tomorrow, if the weather holds, we plan to go off-shore and get as far down the coast as possible. Maybe as far as Ft Pierce, before we head in again. There are two parcels awaiting us at Vero Beach, so we need to drop in there to pick those up. But, then we will be ready to cross at the first weather window.

Breaking news: the outboard is fixed. I must run, pay the bill, store the car and get ready to cast off lines.

Will write again later on. Hugs to all, Heather & Murray