As per usual, time has flown by and it has been much more than a month or two since I updated the website and our friends. But, excuses abound.

Most of my spare time, all summer long, was spent working on my first ever queen sized quilt. It is a blooming nine patch quilt that I took a one-day course on in June. It has a huge number of tiny squares and a myriad of seams and was probably not the best selection for a first-time quilter. Finally, in late September, I had completed all of the squares needed for the quilt and it came time to lay it out. You see, I wasn’t quite sure what piece was to be sewn to what. 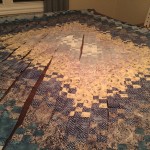 So, I started to lay it out on our bed, not thinking that the quilt would be larger than the surface of our bed. I dragged furniture from all over the house to hold the blanket up and allow me to continue the pattern. Finally, after two hours, I could step back and view what the quilt would look like when it was finished. It was gorgeous! But, now what? It was covering our bed! I didn’t want to disassemble it. Murray, bless his heart, made me a support for the blanket using some wood, some screws and clamps so that it could stay set up in the dining room until I finished sewing. And, within two weeks, I completed the assembly process and took the quilt to a long-arm quilter to be finished. Yesterday, we got the 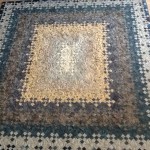 quilted blanket back and now I just have to apply the binding. I cannot believe that I finished it.

Murray has been spending a lot of time at the farm this fall, as usual. This year,he helped with harvesting wheat, rye, coloured beans, soy beans and corn. The weather co-operated and they finished the corn harvest earlier than usual. When he wasn’t at the farm, he was helping neighbours with jobs around their homes. One, that took much too much time, was adding a railing down the front steps for one couple. He couldn’t find the railing to match until someone said “that is a fencing product, not a railing”. The correct parts were ordered and he installed the rail. It required drilling a four-inch hole in a patio stone to cement in the bottom support and to maintain the look of their front walkway. The finished rail looks as though it has always been there. 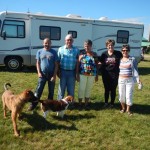 The Rialta took us on a couple more adventures this summer and fall. In August, George & Barb held The First Annual Runway Campout at the farm. There were six rigs in attendance and we had perfect weather for the event. Music and food shared with friends, new and old, made for an excellent time. We will definitely join in next year’s event.

Later in September, we travelled to the Upper Peninsula of Michigan to meet up with some relatives and old friends of George & Murray. They made us very welcome and we toured around the area, forcing ourselves to visit the local wineries for samples. It was too cool for swimming but that didn’t stop us from visiting Lake Michigan in two different areas. 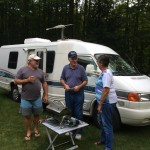 Just a few weeks later, we again loaded up the Rialta for a weekend rendezvous at the farm. Some cousins were coming to visit with their motorhome and wanted us to join them. I skipped out on the Saturday morning activities to get together with my long-time friend, MaryAnn. It had been a couple of years since we had managed to meet and it took a few hours to catch up on all of the news and changes in our lives. 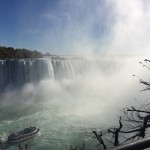 In October, we met Jeremy, Cynthia, Matthew and Samantha in Niagara Falls. They were there for a conference on Juvenile Diabetes and had arrived early enough to spend a day with us. Although it was cool, we investigated the tunnels under the falls and then jumped into the hotel pool. After dinner, we exchanged hugs and headed back home. It was great to see them without travelling through Toronto! 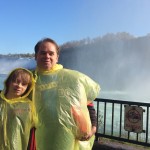 Usually by now, we have loaded the Rialta and headed off to the boat. But, due to a medication change in September, we have delayed our departure until mid December. So, we are Christmas shopping and doing projects around the house. 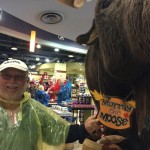 Murray celebrated his 70th birthday this November and 24 friends joined us to mark the event. One of the gifts that he received was an original print. That encouraged us to get our framing supplies out of the basement and to read the instruction book. The print is now ready to hang and we may have another hobby/small business.

Steve and Katherine have purchased a new home and we helped them get their current home ready for sale/open house. Mostly I forced myself to spend time with my grandbabies while Murray, Steve and Kath worked. It was a tough job but someone had to do it. Their house sold very quickly and they move into a brand new home in mid January. Unfortunately, or maybe fortunately for my back, we will not be here to assist them with the move.

There are a couple of big jobs to do at the boat before launching this year. One job is to re-seat some thru-hulls as the backing plywood has rotted. The other job is to free up our prop. When we hauled in April, we discovered that the MaxProp had seized up. Both of those jobs must be done while we are on the hard, as well as the usual bottom paint and hull polishing. The marina will close down for almost two weeks at Christmas and we hope to launch before they close. But, if not, we will finish our work and then jump in the Rialta to visit friends around Florida.

After all, sharing time with good friends and family is the best part of life aboard and on the hard, in the marina or at home.