No, it is NOT the latest dance step or even an exercise routine. It is the best description I could give you of the boat’s action during our recent passage from Eleuthera up to Abaco. We had departed just at dawn, on Wednesday March 11th, from Meeks Patch, near Spanish Wells. The winds were from the beam and enough to allow us to sail.

Once we got out into the deep waters, we met the ocean swell, and it was anything but swell. There was about a three to four foot wind chop on top of the ocean swell of about 5 feet. When those two happened to combine, the results were not great. The ocean swell was hitting us on the stern quarter and would lift the stern, causing the bow to dip towards the sea. Then we would accelerate down the wave. As it passed under us, the boat would rock over to the right or starboard before rolling back to the left or port and then, finally, returning to its normal orientation. This motion made it difficult to move around much and we both took up positions on the small seats to the side of the wheel. Those spots held us quite securely and I didn’t much move from there for the whole trip.

Murray hooked and landed a Mahi Mahi a couple of hours from our destination. Since we were close to arriving, he was able to just wrap the fish, place it in the shade and wait to clean it until we were anchored. 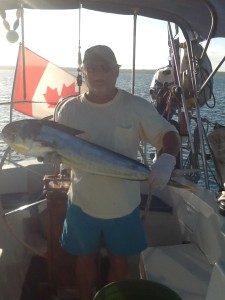 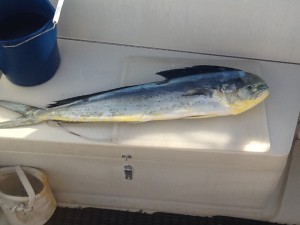 The Little Harbour cut, into Abaco, seemed quite benign but one of those swells managed to toss us onto our beam in the cut. If Murray hadn’t been so good on the helm, we could have broached and then been in serious trouble. I was quite glad to finally have the anchor down and poured our sundowner drinks with a heavy hand. The mahi was dealt with and gave us five dinner sized packages. Somehow, that evening I managed to break a tooth and it seemed to have some very sharp edges. But, maybe I could hang on until we got back to Ontario. At least that was the plan.

The next day, we headed to Marsh Harbour for laundry and re-stocking. The Bare Foot Man was playing at Nippers on Great Guanna the next day and several people that we knew would be going. So, we decided to take the ferry across from Marsh Harbour rather than joining the crowds in the tight anchorage. It was an interesting day and we did manage to meet our friends, even though there were hundreds of people there. We probably won’t rush out and buy his cd’s though. It was spring break with lots of young girls in skimpy bikinis and good looking guys hanging around them.

My tongue was becoming very sore and I was finding it difficult eat or speak without pain. Kim on s/v Clarity recommended a dentist in Marsh Harbour and we visited his office on Sat. His examination revealed an extensive canker on the bottom of my tongue caused by the sharp edges of the broken tooth. After some discussion of the options, he ground and smoothed the edges of the break and prescribed an ointment to protect the tongue from further injury. My usual dentist will make the necessary repairs when we are home.

Bakers Bay used to be one of our favourite anchorages. But, now it has become a huge development with golf courses and million dollar homes. They are constantly sucking sand from the bottom to extend and re-shape the beach. It is still a beautiful two mile long beach but we are not welcome ashore. What a pity. The local newspaper also reports that the reef on the ocean-side of the development is being negatively affected by chemicals from the golf course. The nitrogen is causing increased growth of algae on the reef and that is destroying one of the best dive sites in the world. It is a huge reef of stag horn and elk horn coral, almost to the surface in areas and was just gorgeous when we snorkelled on it some years ago. It is another example of the changes occurring here in the Bahamas that benefits a small group and causes long-lasting repercussions to the environment.

The winds were quite calm and we took advantage of the opportunity to pass through Whale Cay cut, to the northern area of Abaco. Now, we are hesitating, trying to decide whether to take an opportunity to cross over to the US this weekend or wait for another week. It will depend on what the weather guru tells us tomorrow. Either way, we will be without internet starting on the 24th and will have to use the ham radio to send e-mails. The internet access will be very limited until we arrive at the marina. Thus, this will likely be the last you will hear from us for a while.

That too is life aboard!