The title of this update doesn’t just refer to the 60’s and 70’s music that we listen to aboard but also the action of the boat as we have traveled recently. It has almost been a corkscrew action as the waves lift our stern quarter. Then, dipping the opposite side down, passing under and allowing the starboard side to return to and pass the original position as the boat falls off of the passing wave. The boat has rolled from at least 10 to 15 degrees heeled to starboard over to 15 or 20 onto port. Needless to say, it is an ugly ride and those aboard must hold on tight in order to move about safely.

The weather guru gave the green light for the 60 mile trip to George Town, Great Exuma and we headed out from Staniel Cay, exiting onto the sound through Dotham Cut. Both fishing lines were rigged and we hoped for a mahi mahi to take our line. The wind was much closer to the bow than predicted and also much stronger. What else is new! But we were making good time until the winds blew up over 20 knots. Murray and I reduced sail and continued. Then the wind headed us ( came more towards the bow ) and increased once again. This was getting ugly! Tacking upwind, we made it to the next cut onto the banks and, using the high tide, poked our way a little further south before anchoring for the night.

Just after we hauled anchor in the early dawn, a rain squall hit and we completely lost visibility. Down went the anchor again and we waited out this storm. With clearing skies, we hauled again and departed onto the sound through Rat Cay Cut, with Georeg Town now just 25 miles ahead. Shortly after lunch, we were safely anchored near town. We rigged the dinghy and headed into the “big city”. There we visited the gift shop that had been selling my books and introduced her to the new one. After a successful time with her, we stopped at the grocery for fresh vegetables and fruit. Then back aboard for some relaxation.

A guest was invited for breakfast and we introduced him to a Rand McMuffin made with Canadian bacon ( the REAL stuff ), a fried egg and my homemade English Muffins. Yummm. Once we bade Rich goodbye, we hauled anchor again and headed back onto the sound. Even with our late start, we managed to cover over 50 miles and entered Dotham Cut just before sunset. In the morning, we did laundry ( at the best laundry in the Exumas! ), visited with friends and sailed on to Staniel Cay, anchoring near town.

Once more, just after dawn, we hauled anchor and headed into the deep waters of Exuma Sound, this time through Big Rock Cut. This trip was a motorsail but the waves were still large and tossed us about. Shortly before sunset, we dropped the hook at Poison Point, near Rock Sound, Eleuthera. Here we needed to visit a store to receive payment for books ordered last year. But the woman who dealt with those things was away and wouldn’t return until 4:30 pm. Now what? We walked back to the dock where we had tied our dinghy. There we met another couple of cruisers. They had a rental car for the day and invited us to join them. 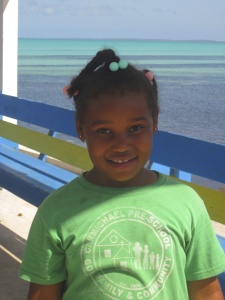 So, off we went, driving on the left and headed north. Our destination – Tarpum Bay, the next town. At first, it seemed very small. But, as we explored, more of the town appeared. We found a Cultural Centre, displaying artwork and quilts, and a castle nearby built by an artist. Beaches on both sides of narrow Eleuthera needed to be walked and checked for shells etc. It was an enjoyable time and we made some new friends. 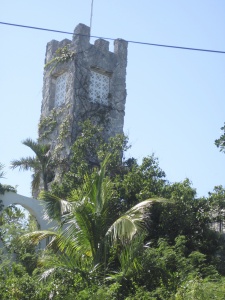 With our issues resolved, we headed out again in the early morning. This time it was a downwind sail but the boat was still tossing and turning, corkscrewing down the waves. This was the fifth day out of the past seven that we had been underway and all in rather ugly conditions. What happened to a lovely reach on a calm sea?

Again, we traveled until almost sunset, dropping the hook near Spanish Wells, Eleuthera. Our friends on MarNel were anchored nearby and we had a joyous reunion. Town beckoned with fresh supplies in the stores, so off we went again in the morning. Loads of fresh vegetables filled our sacks and we stopped at each gift shop in town to promote the books. All in all, a successful day celebrated with lunch out.

Now there was a cold front in the offing with high winds expected. It was time to move to a more sheltered spot. And here we will stay until the winds die down once again, allowing us to move about these islands. With another cold front expected again before midweek, it is doubtful that we will head to Abaco yet. But, when weather permits, if it permits, we plan to head north to Abaco and spend a few weeks there. Ten on to the US.

Right now the only rock and roll is on our XM radio. Thank goodness! But that too is life aboard.