I had promised ( or was it a threat? ) to write more about our crossing. It was fairly uneventful which is a good thing for us but boring for you.

About 0830 Murray hauled the anchor and we departed Great Sale Cay in the Abacos on the start of our 150 nm journey. It was a fleet of six vessels, all headed the same direction. Sojourn, Flextime, About Time and W4 were joined by two US vessels, Feral Cat, a PDQ 36 with Rich and his two cats aboard and First Draft, a Little Harbour 51. Rather than list all of the names as we made radio calls, the fleet needed to be named. Bob on Flextime came up with AZONE for AZ ( for Rich ) and ON for the rest. Just then First Draft spoke up and said they were joining in and were from NY. So, AZONY Fleet became the final name and, if a radio call was put out, all of us would switch to channel 06 VHF and check in. 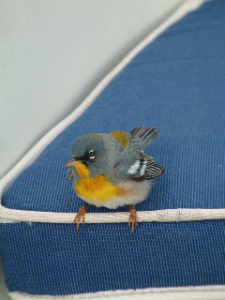 During the afternoon, we had a visitor aboard. It was a very small, about three inch, bluish bird with a yellow chest. Hopping about on the cushions, he twice attempted to climb into the leg of my shorts. He showed no fear of humans and we could almost touch him. He checked out the boat and spent a little time before flying off again. But, before he left, I managed to get some pictures. My bird book is either LOB ( lost on board ) or LIT ( left in Tillsonburg ) so I wasn’t sure of his identification. Rich has since identified him as a Tropical Parula, mostly found in Texas. He was certainly a long ways from land so hopefully he made it somewhere safely.

Nightfall found us at the deep water off of Matanilla Shoal waypoint. By now the seas were becoming confused and larger than expected. The winds were still very light and our mainsail only served to steady the boat a little.

Once again, the AIS was an awesome addition to our group. With it, we were able to access the name of the large ships nearby and, on three occasions, members of the fleet called the ship by name and got an immediate response from that vessel. Twice the ship changed course to avoid us. Those course changes were so minimal that they would not have been detected on a radar or with the naked eye but we were able to see them with the AIS.

Through the night, other than watching for ships, things were uneventful and the fleet checked in every two hours. By dawn, we were just off of Cape Canaveral and the small boat traffic increased as fisherman dashed out to catch the first of the day.

In Canaveral, the fleet split up. Some went to marinas, some continued on but us Canadians had to check in with Customs. Flextime joined us at Port Canaveral Yacht Club’s tee dock. There we used Bob and Jane’s cell phone to call in. Luckily the customs agent would be in the office briefly. The 1.5 mile walk was made as quickly as we could and soon we were on our way again, documents in hand. Through the lock we went and on to Titusville where we had an early dinner and were in bed before 1930 and slept for 11 hours.

On Monday, we launched the dinghies and visited the town of Titusville. Refueling both diesel and propane was on Murray’s list while I wanted fresh orange juice and a few vegetables and snacks. Time was even found to catch up with the laundry. Oh, the joy of sleeping on clean sheets again!

Today ( Tuesday ) we hauled anchor at 0700 and headed on north. Luck was with us as we made it through the lift bridge in the Haulover Canal just before it closed for 1 hr 45 minutes due to the landing of the space shuttle. Seemingly right above us, the twin sonic booms made us jump even though it was expected. This time we were unable to see the shuttle as it landed.

Tonight we are anchored at the cement plant and maybe will make it to the St John River by late tomorrow. That should get us to the marina by Thursday or Friday at the latest. Hopefully, we can schedule our haul for the following Fri or Sat. That would be the 30th of April or the 1st of May. And so the work begins. That too is life aboard.

We will warn you before we head your way.