The weeks before our planned departure flew by, as usual, with a flurry of last-minute social engagements. 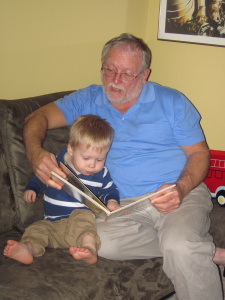 Murray purchased a new ( to him ) ham radio and we managed one more visit to St Thomas to have it checked out and to spend a wee bit more time with James. He does love his Poppa!

The last morning came all to soon and dawn was just breaking behind us as we drove down the road. The bright glow was creating vivid red steaks on the sides of the large blue silos and illuminating a strip in front of us. What was that indistinct line of light? As the sun peeked up further, we could see a rainbow was forming in front of the car. What a glorious sight, with the red sky behind and the rainbow in front! Murray stopped for me to capture the event on my camera. The photo seems to show a faint second rainbow, which I hadn’t noticed at the time. 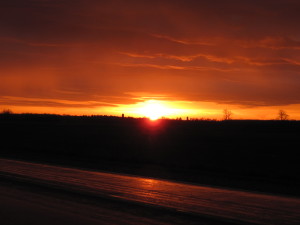 But that was the end of the good times as we drove in and out of rain all day, sometimes almost too heavy to see the road in front of us. Luckily there wasn’t much truck traffic on this Sunday morning, so the splashing from passing trucks was at minimum. The border crossing was uneventful and shortly after nightfall, we stopped near Knoxville, TN, for the night. 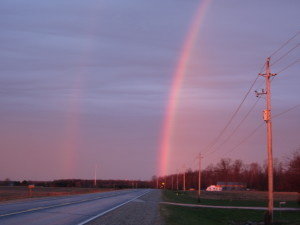 Bright and early the next morning we were underway again and made good time, through scattered rain, arriving at the marina just after 4 pm. The office was closed, so we headed to the motel and settled down for the evening. This was the first year that we had opted to stay in a motel for the entire time that we were on the hard and prepping the boat.

The next morning, we were ready to work, to get the boat ready for the move to the workyard. This was scheduled for 1 pm but didn’t happen until after 3 pm. The boat was in good shape after its summer storage, with very little mould and no bugs to be seen.

The most exciting thing that happened that day was my book – I held the finished, printed form in my hand!!! How cool was that! Before our departure, I had contacted the Staniel Cay Yacht Club and David Hocher ( the owner ) said that he would take 30 copies sight unseen and where could he send a cheque. Wow – now I have sold some books!!

Since then, we have been hard at work and the boat is looking good. Murray is polishing today – wax on, wax off. We have the bottom yet to paint and can then arrange launch. The interior is all washed down with vinegar and water, the suitcases and bags unpacked and most systems tested out. All the food brought from Canada has been stowed and the lists updated. I haven’t started the process of filling lockers yet as it is much easier to load all of that stuff once we are in the water.

The motel is interesting, to say the least. All units are non-smoking, so the tenants stand just outside and the smoke comes back in through the open windows. The small frig in our room has been great for holding some basic food supplies but at night it sounds as though it is breathing and sighing . Our week there is up on Monday morning and I think we will move aboard W4 then. Launch is planned for Wed and we will move down to Reynolds Yacht Centre at that point to complete the final preparations.

After about ten days there, we should be able to head off, down the waterway – just before Christmas. It will be hard to get together with friends, other than each other. We are so late this year that we plan to push on and get headed south. Besides, I have books to deliver.

Hugs to all, enjoy the Christmas preparations and your time with family and friends.

Heather & Murray
almost back aboard again