This is the very latest, that I can remember, to see the leaves come out on the trees! As we drove north in April, we watched the leaves disappear. They were in full view in the Carolinas, Tennessee and Kentucky. But, by the time we reached Ohio and Michigan, the trees were still winter stark. Usually it is only a week or two after we arrive home before we see those little buds pop out here. Not this year! There are so few leaves, that we have been able to easily watch a couple of robins raise their young ones. There are three little beaks rising up for the worms that mom & dad provide. Soon, they will learn to fly and head off.

The day after we arrived home, it snowed! I guess that the weather gods thought perhaps we had missed out on all of the fun this winter and wanted to give us a taste. There was two inches of snow on the ground when we awoke. Oh well, we could survive on the groceries in the cupboard for one more day and thus decided to wait until it melted. I don’t think that strategy would have worked this winter, from the sounds of it! We might have starved.

On a warm day, we washed the little motorhome and, in the process, filled the crawl space with an inch of water. There was a split in the pipe to the tap into the garage. I guess that heating the house to only 9C doesn’t keep that pipe from freezing during cold, cold winters. It took us a few hours to suck out the water with a wet/dry vacuum. What a job! Then Murray had to replace the tap fitting.

Mur also had a few jobs that he wanted to do on the motorhome. We had been told that the A/C didn’t work and went to get that replaced. The honest business man tested the unit and decided that it worked just fine! Not the biggest unit in the world but it does work. That job was postponed, yeah!

Thank goodness it was as, 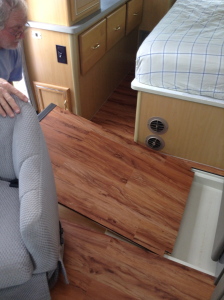 just a few days later, the Volvo gave us trouble. Mur put the key in the ignition but nothing would happen. The key wouldn’t turn! This had happened in the fall as well but Mur had managed to repair/work around the issue. This time there was nothing he could do. Local garages couldn’t help. Luckily our motorhome insurance includes roadside assistance for two vehicles and a tow truck was called to take the Volvo to London. Ten days and almost a thousand dollars later, we had our car back. The lock assembly, the problem area, needed to be ordered from Sweden! The Rialta became our car for the duration of the fix-it time. 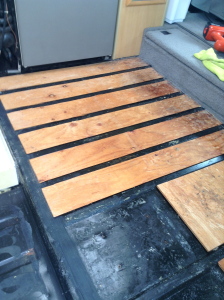 The next job that Murray attacked was removing the carpet in the Railta and replacing it with a waterproof vinyl click flooring. What an awful job that was! As he tore the carpet out, he discovered that they had glued foam down to the floor, under the carpet. Using gallons of glue, at least it seemed that way. We tried heat – that didn’t work at all but just got stickier. Eventually he came up with a method that worked. The finished job is lovely.

Yesterday we were finally able to plant some flowers without the fear of frost killing them off. The plants were purchased at the annual horticultural society auction on Tuesday night and we got some lovely ones as usual. The gardens are looking great, both the flowers and vegetables. Murray’s garlic wintered well and we look forward to the harvest.

Our trip to Newfoundland is scheduled, with tickets already purchased on the ferry for near the end of July. Ham radio friends, never met face-to-face, will be traveling with us for part of the journey and we will visit other ham radio buddies on the trip. There are also cruising friends scattered along the way as well and we will stop where we can, for visits.

So, that is what is happening in our lives. How are things with you and yours? Healthy, if not wealthy, we hope.

Hugs from
Heather & Murray
hard aground