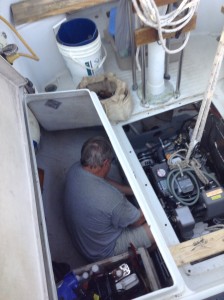 Finally, we have a running engine again! It has been a long, difficult and time-consuming journey.

On Dec 16th, we made the actual order for the engine, a Yanmar 3JH5E. A few days later, they informed us that it would take about two weeks to obtain the engine and transmission that we had ordered. So, although the transmission was also 30 years old, we opted to retain it and ordered just a bobtail ( the engine without a transmission ). It was to be delivered along with all of the adapters necessary to connect to our existing transmission.

On Dec 23rd, the engine arrived at the front of our friends’ house. Using levers, an appliance cart and four man-power, it was moved to the dock beside our boat. 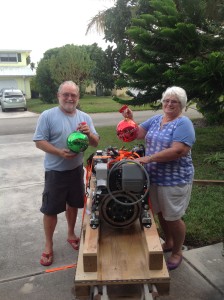 Murray had already removed the Westerbeke, using the main halyard attached to the end of the boom and a four-part line from that same point to the centre lift point of the engine. I was the winch wench that did the cranking while Murray kept things centred and clear from obstructions. We then sat the engine down on planks laid across the cockpit seats, lowered the boom again and lifted the engine high enough to swing it above the lifelines and over to the dock. Then he cleaned and painted the engine room in prep for its new arrival.

On Dec 24th, Murray and Lonnie, a mechanic friend of our host George, started to examine the engine more closely. They soon discovered that the bell housing and adapter, to connect to the transmission, sent with the engine was incorrect. Although they called the dealer immediately, they were informed that the marine industry was closing down for Christmas and would remain closed until Jan 5th. We were stopped in our tracks. 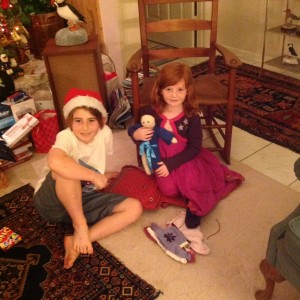 Luckily our hosts had many events planned to keep us entertained. Christmas Day was super, with a lot of friends around. An Irish sailboat with a family aboard made the day even more wonderful as the children entertained us all.

Murray continued to prepare the engine room with lost of new hoses and vents as all had been increased in size on the new engine. The engine mounts provided were still too high so, after on-line research, Heather figured out that DF-2207-2 mounts were the ones we needed.

On Jan 5th, we phoned the dealer to obtain the correct bell housing etc only to be told that it would take at least two weeks. Heather called Mack Boring in New Jersey and was told that they made their own version of this adapter/bell housing assembly and that they had it on the shelf. So, we called back to the dealer to have them order these parts. What…. They cannot order them! The distributer has too. OK, the dealer caller the distributer and asked that they order the parts. Nope, they won’t. So, hHeather ordered it herself. During the same conversations, we told the dealer about the needed engine mounts and he said they would be in the next day.

The mounts arrived but were the wrong ones. Heather had been in touch with a person at the manufacturing company and queried him about the ones that the dealer got for us. He said not to use those unless absolutely necessary as the engine could pull out of the mount if we were to capsize. The better mount for us was the one that Heather had found – the DF2207-2. So, we ordered the correct ones from the manufacturer and returned the inadequate ones to the dealer.

The final parts arrived late of Friday. Saturday saw us lift that engine in and out of the engine room six times! This was caused by the fact that the new Yanmar was a different size and shape from the old Westerbeke. By the end of Sunday, it was almost finished. Today, Monday, we started it up!

Tomorrow, Tuesday, a mechanic is coming to check out the installation and to go with us for sea trails. this will validate our warranty as we didn’t use a Yanmar mechanic to do the job. Murray did all of the work himself assisted by Heather.

This story is a bit long but I must make it clear that neither the distributer or the dealer have been a huge help to us. They provided no parts list, no installation manual ( although we asked for both ) , laughed at the idea that Murray could install the engine himself and also made errors in parts sent and parts ordered. We are not impressed to say the least.

The research that Heather did on-line and the companies that she contacted advanced us much further than any assistance from the dealer and distributer. And Murray is a mechanic extraordinaire !