We moved down to Hog Cay on Feb 7th and joined a large fleet of cruising vessels. Shortly after our arrival, Kevin on Mirabelle announced that their dog, Danny, had gone missing on Raccoon Cay. They had tried to search the island for him but that is difficult to do and the dog was deaf. After 48 hours, he asked for volunteers to help with the search. Murray and Doug, from High Stepper, went by dingy while many others sailed back around Margaret Shoal to anchor at Raccoon. The searchers, about 25 volunteers, spread out and crawled on the goat trails through the bush. It was hot and exhausting work in terrible conditions. Some tracks made by the dog were found but, otherwise, they had no success. Murray and Doug returned, scratched and sore from the ordeal. Kevin and Becky have placed water and dog food out but the food is not touched, except by the land crabs. After two weeks, they have finally given up and headed back towards Long Island or Exuma. During the search, a cruiser was injured as she fell onto her face on the razor rock. She was unconscious for about 30 minutes after which her husband helped her back to the beach. With two ER doctors and an orthopedic surgeon as part of the search party, she received excellent care and had 5 or 6 stitches in her face, along the laugh line. Her eye and jaw turned black and blue and she was very sore for most of a week.

The “Captain C” mail boat arrived early one morning and we delivered our empty propane tank to the ship, for re-fill in Nassau. They only charge $10 for this service, whereas in Staniel Cay it costs us $22 for a re-fill! Later, we took the dingys into town for fresh vegetables and a chance to have lunch at Silver Tail Lodge. Here at Hog Cay, there seems to always some event happening ashore. Either cocktails, a bonfire/singsong, beach walks on the many trails, garbage burning or bocce ball ( they built a court! ). Or we have drinks with another boat, either their cockpit or ours. It has been very hard on my snack supplies and the cupboard is almost empty already, before the end of February. 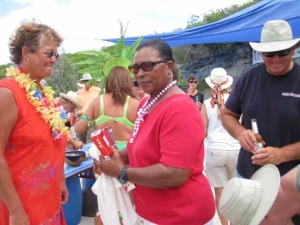 Miss Maxine had been hard at work, organizing her Valentine’s Day party at Hog Cay for this year. She had gotten permission to close the school so that all of the children ( 11 in total ) could attend. She cooked two turkeys, ham, huge containers of peas and rice, curried mutton, macaroni and cheese and potato salad. The cruisers brought salads and desserts to add to the groaning tables. For the first time, there was donated beer and soft drinks and these disappeared very quickly. The wind howled out in the anchorage but the beach seemed a sheltered spot and quite warm in the sun. Several awnings were strung in the trees to create some shade. A large number of the local folk came out from Duncan Town to join in on the festivities. One of the cruisers collapsed on the beach but, with the local nurse there and a doctor on a cruising boat, he received super care and was a case of dehydration. They did take him in to the clinic to monitor the situation but returned him just at sundown, as the party was breaking up. For the party, even more cruising boats showed up making a total of 36 vessels anchored here.

Luckily the weather has co-operated and no clocking fronts have occurred. The wind goes south or south-east and then backs up to the north or north-east and blows like stink. The wind generator flies around and we make power. In fact, for the last four days, the wind gen has run the boat and filled our water tanks.

Yesterday, I made biscuits for breakfast, baked bread and then made a dozen English muffins afterwards. Today, we invited friends over for Rand Mcmuffins with back bacon, cheese and a poached egg on homemade English muffins. Yummm! Tonight there is another party on shore, a cookout where we supply the meat we wish to grill and a side dish to share. The social swirl is un-believable.

High Stepper will head on north soon while we start to watch for a window to head further south. Next Exit has agreed to join us on the Cuban adventure and that time is drawing near. Somehow I must add to the larder as we cannot expect to find supplies in Cuba or rather, do not know what supplies we might find in Cuba. Tomorrow we will try to get to town for fresh vegetables, if the wind doesn’t blow too strong. 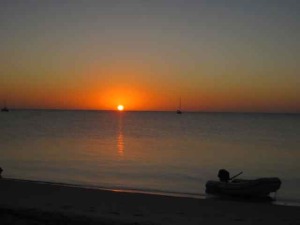 That is life aboard, sun, wind and blue skies with barefoot parties on sand beaches. Sounds idyllic, doesn’t it?

Hugs to all up north and we will see you soon – less than two months now!