Last Saturday night, we drove into Jacksonville to watch the boat parade and fireworks display. Murray did an excellent job of negotiating the downtown streets and finding us a place to park. We could not believe the huge number of people who were there for the same reason. There were so many people that the walkways along the river were jammed and it was very difficult to make forward progress.

Eventually we found a spot near the fence with a good view of the water. By now, everyone was hungry and it became the women’s job to line up to obtain liquid refreshments and a pizza. This endeavour only took about 45 minutes! Over the heads of the crowds, we caught glimpses of brightly lit vessels passing by. Finally, success ! With pizza in hand, we barged our way back to our place by the fence and joined the guys. Luckily the parade went around twice and we got to see all of the boats. 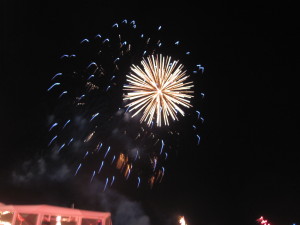 When the parade finished, the boats tied up at the waterfront. Once all boats were secured, the fireworks started. Wow! What a show that was! Actually, two shows, as it was duplicated further down the river, beyond the Main Street Bridge. At one point, both bridges were dripping or pouring “fire”. It was the most incredible show any of us had ever seen! The finale was a constant barrage of fireworks that reverberated in our chest cavities. Using my little “point and shoot” camera, I took a large number of photos and here are a few. 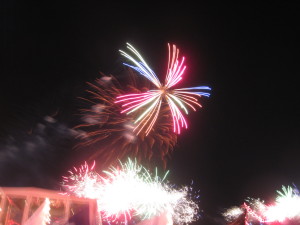 It was an incredible evening but one that we will probably not repeat. Fighting the crowds and traffic once was likely enough for the next few years. 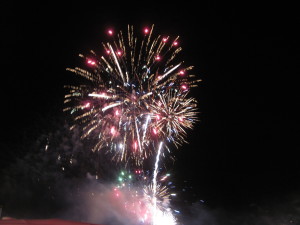 Things are going well on the boat and the job list gets shorter by the day. Our boat survey was completed on Friday and the surveyor found the vessel in “above average ” condition. Murray found the tiny leaks in the dinghy and repaired them yesterday. There is just the filling of the lockers to complete and shopping for Christmas presents. Oops, Murray just reminded me that he still has to align the engine and that is a big job. And it is a job for which I will try to be absent from the boat !

In about two weeks, we will pack the car and head north for Christmas. Perhaps we will see you then?

As you might have noticed, we departed Ontario on Nov 4th and arrived
in Florida at the boatyard on the 6th, ready to get to work. Except
for a few minor details.

Murray had succumbed to a terrible cold! The first symptoms started on
the drive south and, by the time we got to the marina, he was feeling
quite punk. But, he persevered, though sneezing, coughing and blowing
his nose repeatedly.

The boat was dirty, which is normal, but below decks things were not
good. It had been a very wet and hot summer. Those are ideal
conditions for mold and that is exactly what we had. All of the teak
and a lot of the fiberglass had the grey haze of mold. The mold spores
had just turned up their noses at my anti-mold devices and my spring
wall wiping. Luckily, we weren’t planning to spend the night aboard.
While Murray took the shade cloth off in preparation for the move by
the travel-lift, I started wiping down the walls etc.

It was quite late before they moved us into the workyard and soon
afterwards we closed W4 up and headed to the motel to crash. It took a
few days, but things started to look better down below decks. Murray
ordered, installed and re-wired new batteries as the old ones were
completely dead. The weather was quite cool and raining off and on.
Hot showers at the motel were the best part of the day!

One warm afternoon, we borrowed some scaffolding. The waxing of the
hull moved to the top of the work list and W4 started to gleam.Murray
gave the bottom a quick wet sand and together we put on the new bottom
paint.

Exactly one week after we drove into the marina yard, we launched! The
deck was a mess and there were many jobs to be done, but we were in
the water!

The new solar panels arrived long before we had expected them and they
were riding around in the back of the car. It just required us to be
quite cautious of what was set on top of them as they are very
fragile.And expensive.

Today’s job, once the wind died down a little, was to install those
panels above the bimini on the arch. Murray had made a bracket to hold
the panels and, assisted by a nearby boater, he hoisted them into
place. Now just to complete the wiring. The two new panels are 130
watts each. This is double the output of our previous panels. We sold
the old ones before leaving in the spring.

I have been working on some of our computer problems and had great
success today. The program that we used for charting was failing each
time that I opened it. Not a good thing. We had backup programs and
computers but wanted that one to work. I had assistance from other
cruisers through a website called Cruisers Forum. With their
suggestions, I worked through the problem and we will have charting
available in the cockpit again. Yeah!

There is a party planned here for Thursday to celebrate Thanksgiving.
And, you must know that we are always ready for a party. I am taking
garlic mashed potatoes and friends are deep frying two turkeys. Not
sure how many will attend but it will be fun, I am sure.

Well, that is the news to date. Plans are to stay here at Reynold
Yacht Center until mid Dec and then travel back to Ontario to
celebrate Christmas with our family. Perhaps we will see you then.

Until later, hugs from
Heather & Murray
happy aboard Windswept IV