Now that we had a new motorhome, we needed to sell the Rialta. Trading it in wasn’t an option as the book listings for these units is about $4000! But, the Rialta’s have a huge following and sell for much more. We placed ads on Kijiji in Canada and Craigslist in the USA. There must have been about 20 responses from Canada and many from the US.

The complication was importing the Rialta into the US. It is possible to do it yourself but not all counties offer that service. Once we found a buyer, we contacted the salesman at RV Kountry, where we had purchased the View, and he offered to look after the paperwork for the sale for a flat fee. Yes, that could work for us.

What was the reason that we purchased a motorhome in the US, you ask? Although the Canadian dollar was not strong against the US one, we still would come out ahead financially. And, there was much more choice of used units in the US, especially in Florida.

Then it was time to gather some more of the paperwork necessary for importing our new vehicle into Canada. The Registrar of Imported Vehicles has a very good website and supplies you with a lot of information. They even answer the phone! At a government agency, that is unusual. I had already checked to make sure that a 2007 Winnebago View was on the list of “allowable vehicles for import”.The RIV requires a letter from the manufacturer showing that there are no outstanding re-calls. As our unit has two manufacturers, we needed two letters.

I contacted Winnebago and obtained the necessary letter from them. Then, it was time to look into the Dodge website. There we discovered that there had recently ( Jan 2017 ) been a recall and it was shown as “ no parts available “. Further investigation revealed that there was a fault with one of the warning lights on the dash and they had no idea when a fix would be available.

Now what? We called Transport Canada and Dodge to try to obtain more information about possible repair dates to no avail. We called the salesman to try to back out of our deal but he said that was impossible. He offered to sell the View for us, for a fee. But, then we asked about the Rialta. As there was a contract on it already, we couldn’t back out of that deal either. We would be left on the side of the road with all of our belongings!

So, we made the difficult decision to continue with the purchase and hope that they come up with a fix for the recall in a timely fashion.

On February the 24th, we returned to RV Kountry and moved all of our belongs from the Rialta into the View. It was a big job as the Rialta had a lot of storage. But, eventually we were done unpacking and re-packing. We moved a few miles down the road to a WalMart where we had a quick dinner, a drink and slept. 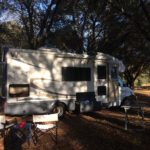 In the morning, we drove north to another free campground that I had found on Allstays – an app for campgrounds, fuel staops etc.. It was in the Ocala National Forest and had no amenities but we just needed to re-group and get our heads around the fact that we had spent a lot of money on a unit that we may not be able to drive for – months? years??? No one knew!

After a couple of days getting to know our View, we headed back to Reynolds Park Yacht Center. There we met up with some sailors, shared some drinks and started to feel better about things.

I was paranoid about the importing process and had done a lot of research. I had discovered that you had to export the vehicle from the US first. I had called the border twice to verify information that I had found on-line. During a third conversation, the officer mentioned that I would need a ITN. That was new! I hadn’t found any info about that!

More on-line research. Thank goodness for a smart phone with a large data plan. One of the sites said that non-US citizens had to hire an agent to file export information and obtain the ITN. The brokers I spoke to quoted a charge of $225 to $350 for this process. After much more research, I found a site ( simplifiedtradesolutions.com ) that would apply for the ITN for you for a fee of $35. Yes! That was more like it! I filled out their form, paid their fee and obtained the ITN. Then, I sent an e-mail to the border crossing that we planned to use, with the VIN in the subject line and the ITN in the body.

Time was passing by and we needed to have the View back into Ontario within 2 weeks of purchase. But, there was still one more hurdle. We needed a clear title showing that there were no outstanding liens 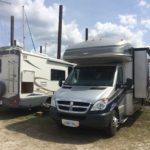 on the vehicle. The previous owner’s loan had been paid off with our purchase but the bank was taking their time passing on the paperwork.

George and Barb arrived at Reynolds to visit with us for a few days before heading off further south, enjoying a break from winter. They drove down from Ontario in their Fleetwood Pulse, a slightly newer and a few feet bigger RV than our View. It was great to get together with them again and catch up on the news.

Finally, on Tuesday, the clearance from the bank came through and we were able to print it out and head for the border. The View gave us 18 miles to gallon before we attached the trailer and 16 while hauling the trailer along. On Thursday, we arrived at the Detroit border crossing. But, we couldn’t find the gate the officer had told us about. I was looking for a door. An attendant at the gas area helped us get turned around and another attendant lead us back through traffic towards a chain link gate. Once inside, we found a small spot amongst all of the huge trucks and joined the line in the office. After examining all of our papers, the officer applied his stamp and sent us along. We crossed the bridge and back into Canada, declaring both a trailer and RV to import.

The Canadian border officer started the paperwork for RIV and sent us to pay the Federal taxes. Once that was done, we were free to go.

Home! It took about six hours to empty the View and we had to hurry as the temperature was dropping and it wasn’t winterized. But, George had a heated shop at the farm and there was space for us. At least until they got home again.

Then there was about three or four full days of putting things away in the house. All of our things from the boat had to be integrated into our small home. Boxes were made up for things to sell, to donate, to store and to toss. But eventually it was done and our home looked normal again.

Now the trailer has finished the import process and is awaiting a new owner. The View is still waiting for a solution to the recall and we are making improvements as we wait. New day/night shades have been ordered form Home Depot and should arrive in early April. Murray has already changed most of the lights to LED but we still have replacements for the halogen under-cabinet lights to find. Murray is repairing drawer slides and adding compartments to the drawers for silverware and utensils. A shelf has been installed in an outside storage area to create more space. I need to make bags for the lawn chairs in order to store the chairs on the bunk above the driver. Lots of jobs to do – perhaps I should get busy!
Hugs from
Murray & Heather
New Adventures Aground