Once again, the time has flown by. But, there is some exciting news. We finally got to drive our motorhome!

Yes, it did happen! We had been checking the MOPAR website, every day or so, to see if there was a fix shown for our vehicle recall. We had called Transport Canada again as another deadline had passed and they had assured us that the repair was expected to be available by mid July. So, I checked on the 15th – nothing. Checked on the 17th – nothing. I gave up for a couple of days and re-checked on the 19th – you guessed it – nothing. Murray checked on the 22nd and Yes! There it was! The line “parts available”. Immediately I called the Dodge dealer in London that could handle our size vehicle and the parts man said “the repair doesn’t require parts”. It was just as we suspected – a software update only.

So, we made an appointment for the recall repair/update as well as for the safety check and e-test needed to complete our licensing requirements. As the appointment was early morning, we dropped the View off the evening before. When we arrived back at the dealers the next morning, he had nothing but bad news for us. The bill for things that they required for the safety check would be $2000! They were unable to perform the e-test due to the size of the vehicle. Also, they were unable to complete the recall repair as the vehicle was from the USA!

As you can imagine, we were upset! They suggested that we take the vehicle back to the USA and have the recall performed there. How could we do that when the vehicle is not licensed? We would not be able to take it across the border! After a few hours of phone calls, we got help from FCA Customer Service. The agent there called the dealership and spoke to the technician involved. It was just a matter of getting a software patch from the Tech Service department at FCA! 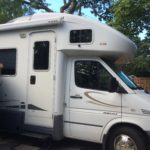 Bottom line is that we left, after many hours, with the recall completed. We paid for the safety check they had performed – almost $300! The safety check and e-test would have to be completed elsewhere.

Murray’s brother, George, recommended a truck service garage that he uses and we made an appointment with them for the balance of the work needed. Our vehicle passed with flying colours! Oh, Murray had done a couple of small things that showed up on the safety done in London but they amounted to less than $50 in parts. But, on the 1st of August, we could legally drive our ‘new’ motorhome! It had only taken 5 months!

Now, it was time to use it. We packed quickly and headed out on August 3rd for a few weeks. We hadn’t even paid any attention to the fact that is was a long weekend coming up and parks would be jammed. No worries – we are mostly going to stay in driveways anyhow. 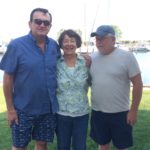 First stop was in Sarnia with longtime friends, Brian & Kathy. Their home is right on Lake Huron and we spent three days enjoying sunshine, BBQ’s, visiting and shopping with them. On Sunday, we headed to Collingwood and met up with Steve & Margaret at whose home we spent a lovely evening. 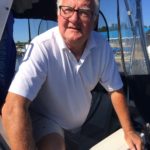 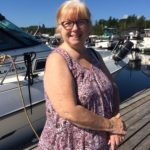 The next day, we drove on to Penetang to meet up with Dave & Brenda at the marina there. Murray had arranged to purchase a ham radio that Dave was selling for a friend, so that was added to all of the gear in our wee home. We were easily convinced to spend the night in the parking lot and depart the next day. That gave us more time to visit.

On again in the morning, we headed to Orillia to touch base with my Aunt Barb. She hadn’t been well enough to attend our 50th and we wanted to take time to see her. Another lovely home by the water – this time Lake Couchiching. From Orillia, we headed to Parry Sound and spent our first night in a campground, Oastler Lake Provincial Park.

I had been in touch with Kate East, trying to arrange a meeting with her mother, Annabelle. Maury and Annabelle East had been our employers for 8 summers and were the former owners of Killarney Mountain Lodge. Unfortunately, Maury had fallen and broken a hip and was currently in a nursing home. But, Annabelle had time to see us! It was a wonderful visit with both daughters, Kate and Jennifer, there as well as Kate’s fiancé Jullian and Jennifer’s twins. Annabelle and Maury had purchased a lovely home on the water just north of Parry Sound, with the typical smooth rock shoreline and deep water right to the dock. Too bad we didn’t have W4 anymore.

Tearing ourselves away, we motored on to Killarney where we spent 3 nights at Roque’s Marina in the campground. A friend, Rob McGuffin, was sailing in the area and met us there. He came bearing fresh wild blueberries as well as blueberry jam that he makes aboard and gives to his friends. Luckily, we qualified for some of this delicious jam. One afternoon, we even went out for a sail – my first in 8 months. I was ok aboard but very careful climbing off and on.

On Saturday, we walked to Herbert’s Fishery for some of their famous fish and chips for lunch. A former waitress at the Lodge, Tracey, came flying out and enveloped us in hugs! It was so good to see her! But, the surprises were not finished. Paul and Lindsay , former guides at the Lodge, walked up and joined the line for fish. More hugs and then we shared a table and chatted. They said that even more people might be coming – Mel and Mike, again former employees of the Lodge. They showed up shortly after along with their two kids. Holy crow! Kids! This whole group, plus others that we would have known, had been camping out on Philip Edward Island for a few days. What luck to have met up with these guys.

That evening, Rob joined us in the Carousel Lounge at the Lodge for pizza and musical entertainment by Andy Lowe. Paul and Lindsay showed up as well as Kris Pavel. It was a day for reunions. 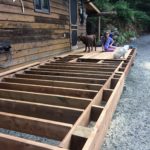 We tore ourselves away on Sunday and drove to Haliburton where we were to meet up with CarolAnn Darling at her cottage. Her dad, Doug Leverton, and step-mom Connie, would be there visiting from British Columbia and helping to build a deck. CarolAnn didn’t tell us it was to be a surprise for Doug & Connie. The double-takes and the looks of shock were amazing. Murray joined right in with the deck building while I sat and supervised. Although we had food in the motorhome, CarolAnn fed us and very well at that. She had quite a large crew there for the weekend working on the new deck and they had made amazing progress. It wasn’t had to convince us to stay an extra day, giving us time to catch up with Doug & Connie as well as help out. 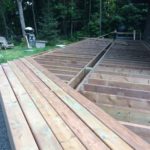 On Tuesday, we pointed the nose toward Ottawa, staying on lovely back roads. It was an enjoyable ride through some beautiful country. By mid afternoon, we were parked in Jeremy & Cynthia’s driveway in Kanata, our home for the next 5 days. It was great as we were able to spend some time with Matthew and Samantha during the day, learning about magic cards and working on a 2000 piece jigsaw puzzle. The weather had turned cool so Samantha and I only had one brief swim in their pool. But, we found things to fill our time. Murray and the kids went on long bike rides daily and, of course, shopping had to be do 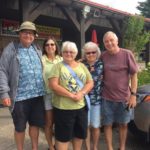 ne, along with laundry.

From Kanata, it was back to Bancroft for the Bahamas Reunion with some sailing friends. Bob & Jane have a cottage on Monck Lake and have been hosting us as well as Doug & Sharon for a weekend the last six years or so. We weren’t sure that the motorhome would be able to get down their narrow, winding road but Bob led us in, warning us if traffic was coming. Phew, it was close but we made it and even managed to turn around. The Cottage Games began as Bob & Jane listed the challenges for this visit. There would be 4 events – shooting a BB gun as well as bow and arrows at cans, darts, and bean bag toss. The men cleaned our clocks and I was in last place when the points were added up. Oh well. It was a great time with lots of laughs and too much food as usual.

It had almost been three weeks and it was time to go home, do laundry, shop and re-pack for the Runway Camp-out Weekend. It was just a brief visit at home but we got a lot done in two days before heading to the farm. This year there were 8 rigs camped and Friday evening George set a hollow tree trunk ablaze for our campfire. What an awesome sight that was! The fire burned inside and glowed out through the cracks. On Saturday, we held the Farm Games with ladder toss, bean bag toss, croquet and golf. Again I was last but this time I got chocolate! Saturday evening, many of George & Barb’s friends joined us for dinner and music. Barb had made scalloped potatoes, roast pork loin and meatballs etc etc while the rest of us supplied salads and desserts. Again, too much food. Murray cooked many dozen cobs of corn and few got eaten. 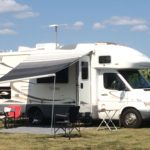 It was two tired puppies that unloaded the motorhome that Sunday afternoon/evening. But, we were very happy with the performance of our Winnebago View on this, the first trip of many we hope. Murray had a list of jobs that he wanted to accomplish but that was to be expected. All in all, it drove easily, stored what we needed to carry, and had great livability. A winner!