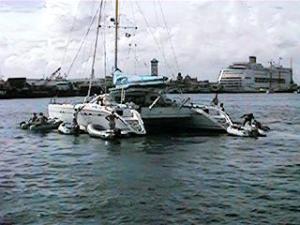 At this time of the year, we contemplate the deeds and misdeeds of the year going by. Everyone becomes more aware of the fortunes and misfortunes of others. Our pocketbooks are always open, either spending or giving generously.

And even cruisers do the same. We have been collecting and making small gifts to pass to other boaters who share our anchorage on Christmas Day. We have obtained a very small tree – a paper one that folds flat when not in use. We have lights decorating our bimini that are run whenever we have enough battery power to do so. The few Christmas cards and presents to loved ones have been mailed. The baking hasn’t begun but it is 85 F here!! I promise I will do some one cool evening.

Our year’s deeds you are all very much aware of and even most of our misdeeds! We have no regrets for things not done – and few for things that we have done. We miss our friends and family especially at this time of year. But, all of us are very busy with our lives and would see each other seldom. Most communications would take place on the phone. Now, it is e-mail that has stepped in. As I type, I picture each of you seated here with me and laughing or crying as we share tales of our year gone by.

A new year is facing us all and soon a new millennium. What will it bring? Some say disaster, some say joy. I vote for JOY! We plan to continue with this lifestyle for a while yet. Our health is great and we cherish these days that we share together. All too soon, that comes to an end. The immediate plans are to spend the winter in the Bahamas and then, perhaps summer in Rhode Island or Maine. If the dollar recovers, we may purchase a travel trailer or motor-home and land cruise for the hot months. But, who knows? That is many months away and we can hardly plan for the next week!

I hope everyone enjoys their holiday season and wish you all good health and long life!!

Love and hugs to all, Murray & Heather