Our planned departure to southern points was delayed – twice. On Thursday,  the day before we were to leave, Murray went to get the RV from our community centre lot. It wouldn’t start! After some finagling, he got it going and thought perhaps it was a temporary glitch. But, again at the house, the engine wouldn’t start. Time to call the experts. Luckily, Gary at Gray’s Fleet Service said to bring it right over, if we could get it running. They determined that a glow plug was not functioning. The part was ordered and all should be well.

The part was installed the next day and the mechanic took the RV for a drive. New faults showed up on the computer – the EGR valve was bad. Gary visually inspected the valve and said that it is cleans and appears fine. His suggestion was to take the RV to Mercedes in London and have them connect their computer. An appointment was made for Monday morning.

Sunday night, Murray told me that he had broken a tooth. So, on the way to London, I called the dentists’ office and eventually got an appointment for Wednesday morning. The service manager at Mercedes told us the EGR valve was fine but we need 8 new glow plugs. That’s funny as we have a five-cylinder engine! And one glow plug is new! So, we thanked them and called Gary back. His suggestion – go south as you won’t need glow plugs in the warm. Good idea!

We finalized the packing of the motorhome and, once Murray had his tooth fixed, we set the house into winter storage mode. We turn off the water in the house, drain the pipes, fill the traps with anti-freeze and turn the heat down to 9C. Then the town turns the water off at the street. Before we are due to return, we arrange for the water to be turned on again. It is cheaper than paying the minimum water and sewer during our absence.

Costco called and said Murray’s glasses were ready for pick up. He had announced the week before that he couldn’t see out of his new glasses. Back to the optometrist we go. He checked the glasses and they were made to the correct Rx. Then he re-checked Murray’s eyes and changed the Rx! Luckily, Costco would re-make them if changes were made within three months. And, lucky for us, they rushed the order and they were done.

So, just before lunch on Dec 6th, we headed to Sarnia. As the construction on I-75 south was creating havoc in Detroit, we opted to go through Sarnia. We arrived at the casino just after 1 pm and looked for the power plugs for our RV. Eventually we found them – halfway up the light standards! Too high for us to reach. Plan B, we parked in Brian & Kathy’s driveway, long time sailing friends. The reason that we needed the power was to keep warm during the cold night.

Early the next morning, we crossed the bridge into the US and headed south. On the road again! Destination for the night – Lexington KY. There we stayed at Kentucky Horse Park, again so that we wouldn’t freeze overnight. In fact, the temperatures reached 16F. Brrrr. 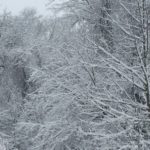 We departed before daylight as we had a long drive ahead for this day. Before we reached Ashville, NC, the light snow in the air had changed to flurries accumulating on the road. Beyond Asheville, the traffic slowed to 15-20 mph due to snow and ice on the roads. We crawled along, passing several cars in the ditch. By the time we got to Spartanburg SC, the snow had changed to heavy rain which continued all the way to Beaufort. There we plugged into power at another friends’ house and fell into an exhausted sleep. It was still cool the next morning as we drove around, getting food and booze to re-fill our lockers. Sweaters were definitely needed. 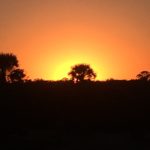 On Sunday, Dec 10th, we got a message from friends that were heading south as well. They spent the night camped nearby and were leaving in the morning for a few nights at the State Park in St Augustine. We had already decided to leave in the morning and this gave us added incentive. It was too late to get a reservation at the park, so we drove straight there and were lucky enough to get a spot for two nights! The next two days, we ate shrimp as much as possible and re-visited our favourite places in St Augustine. 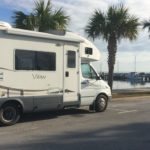 It was time to go to the marina and see if any old friends were around. Reynolds Yacht Centre graciously allowed us to camp there but we were close to the boat construction area. Not the best spot to be in. But, we did meet up with many boating friends and had some good times. W4 was still in storage and we tried not to look at her too longingly.

Friends had recommended Salt Springs State Park and we st 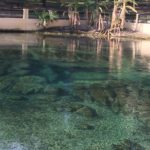 opped for two days to enjoy this area. The salt spring was crystal clear and at 70F constantly.

Christmas was drawing closer and we had been invited to stay with George & Nancy in Hobe Sound. Off we went once again, arriving there on Dec 20th. They were in the midst of planning kitchen renovations and we helped them figure out just what might work. 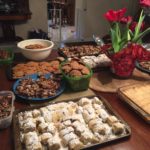 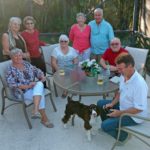 Nancy and I had a cookie-baking marathon one day. Then the days of celebrations began. Great meals shared with old and new friends! What could be better?

On Christmas Day, we managed a great Skype call with both sons and their families and got to enjoy the grandkids and their presents for a while. The call was crystal clear and a wonderful thing.

On Dec 28th, we tore ourselves away from Stuart and drove to DuPuis Horse Camp were we were able to spend one night only. They were fully booked up until Jan 1st. But, I found a spot for 3 nights nearby, in South Bay RV Campground. The sun has been shining but the weather has turned cool here. There is NO SNOW though! 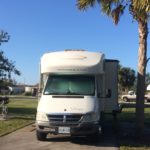 On the 1st, we will go back to DuPuis, the free campground, for a few days. Then……..

who knows? Eventually, we will head into the Panhandle area for the end of Jan, early Feb. Plans after that are hazy and unsubstantial. Maybe they will firm up in Feb?

That is Life on the Road!