We crossed yesterday ( March 16th ) from Lucaya, Grand Bahamas to West Palm Beach. Departure at Lucaya was at 0430 and we arrived in West Palm just over 12 hours later. The passage was a motorsail, so that was good for my knee as we didn’t have to hand steer. The autopilot drove most of the way and did a much better job than I could have with the sloppy, following seas.

Once we anchored, I called in to Customs and did the phone check-in procedure. Then we have 24 hours to show our smiling faces to Customs/Immigration. I asked the officer on the phone for the address and opening times for the Office. He assured me that they were open on Sat. He was wrong. We landed the dinghy at Riviera Beach Marina, walked down the street and found the Customs and Border Protection office. But, the building was deserted. Perhaps in their offices on the second floor? But, the elevators wouldn’t take us up. Now what?

I called back to the nice officer on the phone. A different person told me that the office is not open on the weekend and that we needed to go to the West Palm Beach airport. A security guard gave us the phone number for a cab company. The taxi driver said it would be $30 or $40 one way. Yikes! We made a deal with him and he would wait for us.

But the office of Customs and Border Protection at the airport was NOT open. Now what? I prepared to once again phone my friendly officer who gives us wrong information. But Murray noticed a sign on the door – for Private Vessel Check-in go to CBP office at 1612 Perimeter Rd, near the Executive Airfield.

So, back in the cab and off we go again. New officer but not quite so friendly. Eventually he tells us that we must wait until Monday and go to the first building that we had visited to obtain our new cruising permit.

Seventy-five dollars for the taxi later, we arrived back at our dinghy and eventually back at W4.

But here we sit until Monday.

On Sunday, we headed south by dinghy, through the Flagler Bridge to some free docks with trolley service to Publix. Once we cleared the bridge, in front of us was a crowd of huge motor yachts. It was almost time for the Boat Show! Dodging between vessels, dipping past docks, finally we found a small dock where we could tie up briefly, got to the grocery store, bought fresh vegetables and fruit and headed back to the dinghy. Luckily we arrived before they had completely fenced us in and were able to retrieve the dinghy and head back to W4. If it had been a few days later, we couldn’t have done it at all.

Once we are checked in, we will boogie north to the marina and start preparing for summer storage. Until we get back there, we won’t have access to the internet as we are not going to re-activate the MiFi for such a short period.

Perhaps you have heard on the news that Prince Harry is visiting the Bahamas. Yesterday, he stopped by Spanish Wells, Eleuthera, for short visit. He arrived in a Royal Bahamas Defense Force boat and it tied up at the pier while Prince Harry did a “meet & greet” with some important local officials. There was a small group of schoolchildren, a band and the rest of the onlookers to cheer them on. 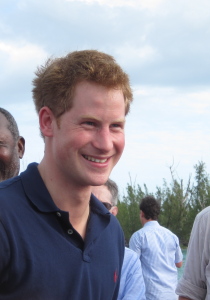 We had taken our dinghy in about an hour before and were some of the earliest people awaiting his arrival. Four American friends joined us for the experience. Another group of dignitaries were put right in front of us, blocking our view. But, Prince Harry came to shake hands with them and we were very close to him. In fact, I even got to shake his hand! I just thrust mine out and he grasped it and shook. My closest encounter with a royal!

Not much time elapsed after Prince Harry’s departure before the next cold front hit with a vengeance. The wind is howling through the rigging now but we are safe and secure here on a mooring ball. This wind is supposed to last the entire week with a break perhaps over the weekend. That may be our opportunity to jump across to the US, right from here. We will monitor the situation and not take undue risks, so don’t worry about us.

In the meantime, I continue to get book orders and have only 10 remaining in inventory. We need to re-order in the US.

Murray went diving with friends recently and came back with two lobster and two conch. Some nice dinners aboard. While he was in the water, I did our laundry at an outdoor washer/dryer. It is just a lean-to, with the two machines, no place to sit and no shade. It cost $16 but I did get two loads done in about 3 hrs. Gosh, I miss the convenience of home!

Take care and we will stay in touch.