We have been at the marina for one week today. In that time, we adjusted every support arm of the bimini, made a pattern, cut the fabric (some parts twice!), sewed, fitted, cut apart and re-sewed. There are leather patches on stress points, a total of 8 zippers and many yards of seam binding. We lost two days with high winds making it impossible to spread fabric out, without becoming a kite. It is done and it fits! I have taken some photos and will pass them along to Jeremy to post on the website. 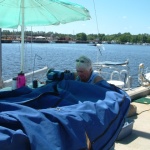 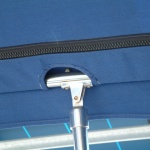 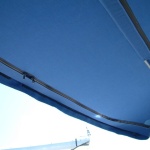 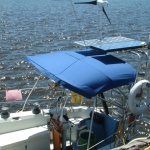 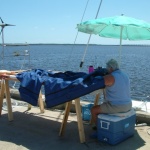 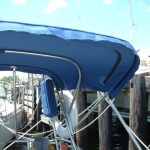 The dodger will be tackled in the fall.

Now, the rest of the boat jobs await us. We haul out on Friday and should arrive in St Thomas by Sat night, late.

Sure look forward to catching up with everyone. Hugs, Heather & Murray

The part for the transmission arrived on Sat at 10:30 and we picked it up shortly after 11. Murray installed the damper plate, re-installed the transmission, and finished in just 2 hours. Then, we hauled the dinghy motor and dinghy again and by 3 pm we were underway. The breakdown only cost us 30 hours! Amazing.

We froze our way, into a north wind of course, northward through St Augustine, into the St John’s River and on to the marina. We arrived here on the Monday after Easter and found a secure spot on the dock.

A trip to Home Deport supplied us with a piece of plywood and some 2×4’s to build a work table out on the pier. Murray even made a recessed spot for the sewing machine that allows it to be flush with the table top. The bimini was taken apart and every section modified, taking about 6 inches out of the total height. Murray had borrowed a tube cutter from the marina for this job and it worked well once he repaired it. Then, we proceeded to make patterns of the bimini by spreading plastic tightly over the existing frame. The plastic is held in place with double-sided tape which was applied to the bimini hoops. The plastic was marked with centre line and any other pertinent information.

Then, we spread the fabric on our lovely work table and proceeded to cut out pieces. And, of course, mark them as the plastic was marked. Yesterday was the first time the sewing machine was used and I applied seam binding to the raw edges of three pieces at the end of the day. We had ordered a binder attachment for the sewing machine ( no, it doesn’t have anything to do with harvesting crops, George! ). That thing was just the ticket. It folded the seam binding over and held it against the fabric, allowing an even stitch to be made. After much trial and error.

Today, Saturday, I attached five zippers, up to 54 inches in length. Then, the wind velocity increased and we had to put things away for a day or two.

A strong wind storm proceeding an approaching front is expected to hit tonight, pressing us against the dock. All of our fenders are deployed between us and the wooden supports of the dock. But, the wind will switch directions by tomorrow and push the boats into the dock on the other side of the pier. And we will be blown away from the dock.

My ankle is still slightly swollen and I opted to fill another ‘script that I had for Cipro. Just to be sure that the infection is gone.

When the wind dies down some, we will be back at the sewing job. And, of course, there is still all of the normal boat jobs to get her ready to store for the summer.

That is life aboard. Hugs, Heather & Murray

Remember that up-beat, positive message sent earlier? That was before we identified the strange, rattling noise coming from our engine room. It was the transmission. We got through two bridges in Daytona before we were forced to sail off to the side of the ICW and anchor. Luckily, I was able to connect to someone’s wireless and made a dozen calls on Skype. The part has been ordered, paid for and will arrive here at a nearby marina tomorrow, Sat.

Meanwhile, Murray is buried in the engine room, disassembling the transmission housing to remove the damper plate that is causing the problems. I am sitting here, making phone calls with Skype and catching up on e-mails. It could have been much worse, if this problem had occurred in the Gulf Stream or the Bahamas. Here we were able to resolve the issue fairly easily.

So, that is the news of the minute.

Hugs to all, Heather & Murray

As our brief message stated, we safely crossed the Gulf Stream yet again. Now for the rest of the story.

On Tuesday, March 27th we bade farewell to our friends ashore and departed from Spanish Wells. It was a very short journey that day, just out to Meek’s Patch about 1 mile away. Once we anchored and did a few boat jobs, we went ashore for some exercise. In walking on the “iron shore” ( the nasty, holey limestone rock ), my foot slipped and my ankle crashed into a dried up tree. A bunch of the branches penetrated the skin and gave me an ugly gash. Murray washed it with peroxide and we bandaged it well with sterile, waterproof dressings.

The next day, both of us were busy getting things together for our planned passage. I baked a cake, two dozen muffins and made macaroni and cheese casserole. Murray strung the flat line that we use to clip our harnesses to while underway and checked over the engine. He went on a final fishing trip and came back with three fish for the larder. Then, the dinghy was hauled and secured on deck. The weather was checked and re-checked. All was in readiness. Two other boats came out to anchor as well but planned to leave at midnight with a different destination and route. We would be traveling alone.

Before dawn, we were up and moving. The New Providence Channel was lumpy and ugly with waves from all directions. The wind was on our stern quarter so we had the main tied down on one side and the jib attached to the spinnaker pole on the other side. Our course the whole time was 305M. That course took us just above Great Stirrup Cay, Berry Islands where we had planned to stay the night and continue on the next morning. But the weather window appeared to be closing on us, so we opted to go straight through. We passed Great Stirrup by nightfall and dawn found us off of West End, Grand Bahama. Neither of us had slept more than brief periods, so we decided to head for Ft Pierce rather than Cape Canaveral.

Ft Pierce was 225 nautical miles from our start while Cape Canaveral was 285 or another overnight. The boat sailed between the piers at Ft Pierce by 3:30 on March 30th. Our maximum speed had been 9.7 knots and average speed was 7.5 knots. This is the read-out from the knot-log and does not account for the push of the Gulf Stream, which added a knot or two for the last third of the voyage. The motor had been used for brief periods and we had to use the portable generator to keep the batteries up due to the draw from running lights, computer, radar etc at night. The engine was used for a total of 10 hours of our 33 hr trip and most of that was just to keep our speed up.

On we went, northward to Vero Beach where we rafted with friends on Brass Tacks. They drove us back to Ft Pierce to check in with customs the next morning.

Monday morning found me at the local walk-in clinic having my ankle seen by the doctor. It had become very swollen and the diagnosis was cellulitis. He took a culture and prescribed antibiotics, both oral and by injection. As he wanted to check it again on Wednesday, we stayed at the mooring. It was tough – spending time with friends, sharing visits with their granddaughter ( Jillian is three ), shopping for groceries in stores with amazing amounts of fresh stuff and eating too much good food.

But, with a clean bill of health, we pulled ourselves away on Wed at noon and heading on north up the ICW.

Plans, you ask? Well, we should arrive at the marina on Sat sometime. Then, wash the boat and tidy her up for the summer. All of the things that I ordered from Sailrite should be there, ready for the big sewing project. We will work on that until time to haul out, likely Friday April 27th. That means we will arrive in Ontario by the 29th or 30th.